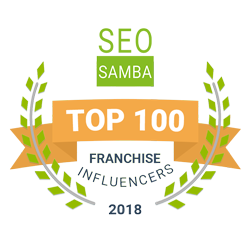 Benetrends extends congratulations to  board member Joe Bourdow.  Joe has been recognized as one of Seo Samba's Top 100 Global Franchise Influencers.

With over 40 years of experience in franchising, advertising sales and broadcasting, Joe has blazed a trail in the franchise industry. He led Cox Enterprises subsidiary Valpak Direct Marketing Systems, Inc. as President through 14 years of record growth, helping to drive system-wide revenues to well over $400 million in advertising sales, and the business to a position as one of America's most admired franchise systems.

Even in retirement, Joe continues to make waves - using the air waves.  He founded an independent radio network in 2012 to carry the first East-West Shrine Game played in Tampa, FL.  The game features players selected based on their potential to make an NFL roster, and benefits Shriners Hospitals for Children.  He also operates RadioStPete, an internet radio stream that focuses on the music, events and talent in and around St. Petersburg, FL.

In 2016, Joe and 4 other veterans in the franchise industry founded Premier Franchise Advisors LLC, which focuses on the needs and issues among senior executives within the franchise sector.

In addition to his role on the Benetrends advisory board, Joe is an active board member and advisor for several well known brands, both franchise and suppliers.

Benetrends is fortunate to have Joe's expertise and guidance.  Congratulations to Joe and all the top influencers!