The Senior Startup: Tales from the Second Act

Age is just a number. For entrepreneurs over 50, age – and the wisdom, experience, and insights it provides – are invaluable when contemplating starting a business.

In The Senior Startup: Tales From the Second Act, you will learn how entrepreneurs over 50 have navigated a new journey in their professional lives and see what lessons they have to share.

Here are a few of the major advantages:

Can it really work? Yes! Here are the stories of others who started a business at an older age and how they got there.

Colonel Sanders had worked as an insurance salesman, steam engine stoker, and filling station worker before starting to sell fried chicken from a roadside restaurant in Kentucky. He used a pressure fryer to perfect a patented chicken cooking technique and his now-famous “secret recipe,” which cooked the chicken faster than pan frying.

He was 62 when he decided to create the first franchise in 1952 in Salt Lake City, Utah. Sales tripled in the first year for the new location. His original restaurant closed and Sanders decided to focus on franchising Kentucky Fried Chicken, at first earning 4 cents on each chicken sold. Just over a decade later, he had 600 KFC restaurants.

He sold the company in 1963 but retained rights to Canadian franchises and became a paid brand ambassador.

Lesson Learned: A winning recipe and an in-demand product can lead to bigger things.

Hans Mulder and his wife, Andrea, purchased the Obertal Inn in 2010 and a group of townhomes in 2013. Born in the Netherlands and raised in Ethiopia, Mulder has always had a sense of adventure. With an extensive background in hospitality, Mulder worked in France, Germany, California, Texas, Florida, and New Jersey.

Having managed hotel and restaurant properties for three decades, Mulder decided in 2010 it was time for a change. He sees himself as a care provider, giving guests an exceptional experience that lets people unwind, decompress, and reduce stress.

In just a few short years, Mulder has grown the business from $532,000 in annual revenue to more than $1.2 million. His advice to other entrepreneurs? Do everything at first. Learn every job. It will give you the insights and understanding that allow you to streamline procedures and improve operational efficiency.

Lesson Learned: You can turn your work and lifelong passion into your own business.

When she was 52, Carol Gardner was having a tough time. A recent divorce had been expensive, she had no job … and a broken leg. For comfort and companionship, she got herself a dog she named Zelda.

She decided to enter a Christmas card contest at a local pet store, sending in a picture of Zelda with the caption “For Christmas, I got a dog for my husband…good trade, huh?”

The quippy victory led Gardner to start her own online company, Zelda Wisdom. Valued at $50 million, the company built itself up as an online store selling humorous greeting cards, calendars, and books. For several years, it produced a series of funny daily witticisms (Zelda’s Day to Day Dogma).

Lesson Learned: Adversity is often just the start of opportunity. Sometimes the seeming closing of one door allows you to consider new doors to open. 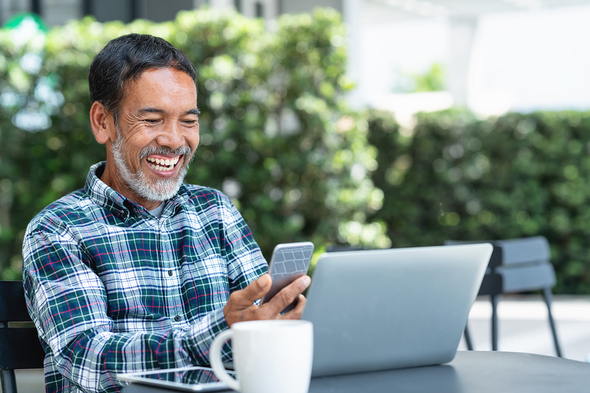 Decades working in the dairy industry sales and marketing roles meant Wally Blume knew flavors and what was popular. When his boss tried to convince him to sell tomato-flavored ice cream, Blume figured he could do better.

When he was 57, he started Denali Flavors, which focused on creating ice cream ingredients and flavors for use by independent dairies. His most popular concoction was Moose Tracks, which combines fudge and mini peanut butter cups with vanilla ice cream.

Lesson Learned: Trust your instincts and know when it is time to leverage all of that acquired experience and knowledge and go at it on your own.

Before the talking gecko or the caveman, there was Leo Goodwin. Working as an accountant in San Antonio, Texas, in the 1930s, Goodwin saw that the insurance industry was in need of an overhaul. He could not understand why so much of insurance was done via brokers when costs could be reduced by dealing directly with customers.

The Government Employee’s Insurance Company, or Geico, started in 1936 when Goodwin was 50. He and his wife, Lillian, has 12 staffers by year’s end and 3,700 policies. Today, the company he created has more than 27,000 employees and more than 14 million policies in effect.

Lesson Learned: If you identify areas where an existing industry can improve, leverage that foresight to strike out on your own.

Molly Choi was 71 years old when she realized that her Korean cooking was popular. She began selling her secret sauces in 2015. She came to the United States to attend art school, intending to work in fashion. However, she married, raised a family, and started a restaurant.

Her son, noted chef Eric Choi, encouraged his mother to start selling the sauces she used at home. Soon her line of bulgogi, spicy bulgogi, fish-soy base, and kimchi sauces was available online and in Los Angeles Korean grocery stores.

Lesson Learned: It may be a hobby or other passion that leads to your entrepreneurial dream being realized. Consider all aspects of your life before deciding what to pursue as a business.

In 2006, a friend showed Rebecca Wilson her luggage tag and asked if Rebecca could make a better one. Wilson created a prototype and her husband, Steve, felt it was good enough to sell online.

From those humble origins, the couple has built their own business – YourBagTag.com.

Located in northwest Arkansas, the company today makes a range of custom luggage tags, including fabric, mini, metal, and laser engraved products. Steve, who is a certified scuba instructor, inspired the launch of a range of scuba tags for buoyancy compensators, wetsuits, mask straps, and other equipment. Tags can be personalized, too.

Lesson Learned: Have you ever thought you can build a better something? Give it a try and you may find you have created a better way to solve a need for consumers who have been searching for the same thing.

Kular wanted to teach her daughters the art of Indian cooking but was dismayed to find that many available products were loaded with fillers, fat, and artificial ingredients.

When she was 60, she created her own spice blends for friends, family members, and coworkers. Encouraged by those in her inner circle, she decided to sell them at a local food festival … and sold out.

Lesson Learned: Culture and tradition matter and could lead to introducing products and services to customers seeking to learn and experience new things.

Entrepreneurs of any age need help in getting their ideas off the ground. That is where Benetrends can help. Our unique approach to startup financing helps reduce the stress and time of applying for traditional financing.

Benetrends helps companies leverage existing 401(k) and IRA funds as an alternative to the startup loan. These funds are available quickly to finance the launch or expansion of your business. To see how Benetrends can help your company, schedule a consultation.