Exploring the State of American Entrepreneurship: A Look at the Stats

Over the past 20 years, a look at the state of entrepreneurship in the United States shows remarkable changes in the demographics of who entrepreneurs are, where they set up shop, and the experiences they bring to bear on the landscape of American business.The 2017 Kauffman Index of Entrepreneurship report on national trends since 1996 shows that the overall rate of startup activity in the nation rose slightly in 2016 after several years of steep increases. This recent trend reverses dramatic drops in such activity during the years during and immediately after the Great Recession.

In Exploring the State of American Entrepreneurship: A Look at the Stats, we take a deep dive into the trends and tracking of American business today. 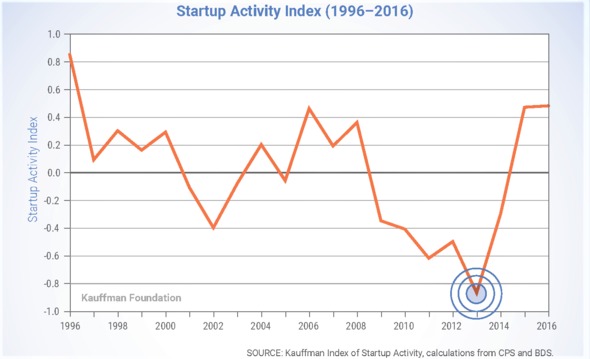 Based on those criteria, here is a closer look at some of the key Startup Activity Index trends in the 2016 data:

One dramatic reflection in the Kauffman data is the startup density, which measures the total number of employees hired by new entrepreneurial companies. It is different from the rate of new entrepreneurs, which indicates only the individual entrepreneurs themselves.

Here, a startup is defined as a business that is less than a year old and employing at least one person (other than the entrepreneur). Researchers use startup density as an indication of how vibrant an entrepreneurship ecosystem is, with higher levels reflecting larger companies with more initial hiring. 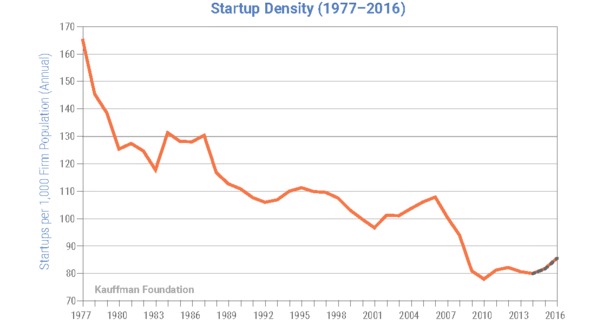 The startup density rates lag by about two years, so the last year of available data is 2014. Since 1977, startup density has sloped downward, precipitously so in the years just before, during, and after the Great Recession.

An estimated startup density of 85.4 for 2016 represents about 448,000 new employer businesses. However, despite a slight projected uptick, startup density lags about 20 points lower than during the recession.

Overall, the percentage of new entrepreneurs who are women has dropped since 1996, when they represented 43.7 percent of the total, compared to 39.5 percent in 2016. 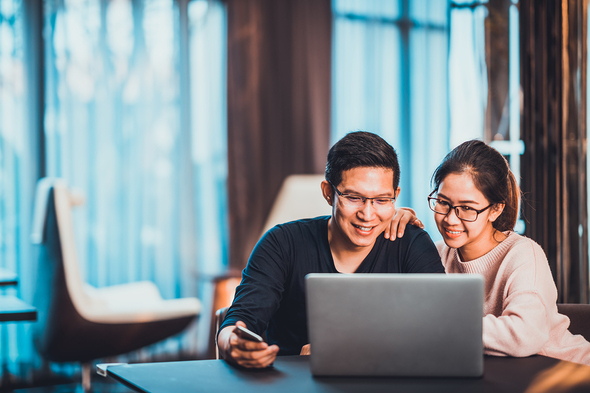 New Entrepreneurs By Race and Origin

Here are the changes in the racial breakdown from 1996 to 2016, showing that while white entrepreneurs continue to have the largest percentage of entrepreneurship, there have been steady gains by other races:

Twenty years ago, young Americans represented the largest percentage of entrepreneurs, while today they represent the smallest. However, the rate is also more balanced among the four identified groups, with each representing roughly a quarter of total new entrepreneurs.

More education translates to a higher level of entrepreneurship, though the rate of new entrepreneurs is highest among those with the lowest educational levels.

When breaking down the national data into large and small states, we see some familiar and surprising names associated with business growth near the top. Here are the top 10 large states and small states in terms of the rate of startup growth:

Rate defined as how much startups have grown as a cohort on average, five years after founding, measured by change in employment

However, the rate of growth is not a fully complete representation of entrepreneurship health. Kauffman also looks at the share of companies that started small but within a decade employed 50 people or more. The foundation further examines high growth, measured as how many private businesses in a state with at least $2 million in annual revenue and three years of normalized annual revenue growth of 20 percent.

With these additional dimensions factored in, here are Kauffman’s top-ranked large and small states for entrepreneurship:

Following the same criteria, here are the top 10 metropolitan areas for entrepreneurial growth:

While the state of entrepreneurship has evolved over the past 20 years, the need for business financing has not. New entrepreneurs have multiple options when it comes to financing. Some choose to pursue startup business loans from a traditional lender, only to face difficulties in securing enough dollars or facing rigid lending requirements.

Others turn to venture capital or crowdfunding, which have limited availability and application to many small businesses.

At Benetrends, we offer a different alternative. Benetrends has helped hundreds of small-business owners leverage existing 401(k) and IRA funds. Using our unique approach, businesses that organize as C corporations can convert existing retirement funds into capital in a matter of weeks, giving entrepreneurs the funds to start or grow their business.

To learn how Benetrends can help you achieve your small-business goals, download The Definitive Guide To 401(k)/ROBS Business Funding.