In 2008, Benetrends helped Jenny Brown create 3 Busy Dogs as a C-Corp in Arizona. Her company is named after her dogs; Quigley, Dax and Muggsy. The company started out making Bowser BitsT pretzel treats and soon added the beer, creating a niche in the $50 billion dollar pet market.

How did they come up with Bowser Beer? It started with a holiday Farmers Market and some spicy pretzel treats Jenny made. People kept telling her to make some for dogs, so she did - with delicious peanut butter instead of spices. After so many customers scooped them up, she decided to offer them at a Pet Expo. Then it hit her, "What goes better with pretzels than beer?" So after a family huddle, they brewed up a beefy, malty, hops-free concoction in 4 different recipes that her 3 dogs tested out for her. One bowl was the clear winner and that became the basis of Bowser Beer. 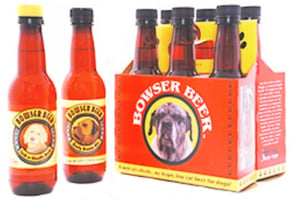 Bowser Beer debuted at the Pet Expo and was a big hit. From there they tweaked their packaging and product, added a new chicken flavor called Cock-a-Doodle Brew and took it nationally and internationally.

Today, if you go to London, England, you can stop in the pet department of Harrods and get a special edition of Bowser Beer, with an English bulldog on it, of course!

3 Busy Dogs still makes peanut butter pretzels and have recently added a new liver treat to accompany their beer for your dogs next happy hour.